I wrote a guide for identifying the brand and age of Lolita items, mostly focusing on Old School. Of course I haven't seen every tag ever so it can't be 100% accurate but these are my findings, and it may be helpful for identifying older items♡

The first Angelic Pretty tag that I believe is documented. I've never seen a tag older than this (this picture is not mine either). As by the name it's from when Angelic Pretty was just named Pretty. According to Lolibrary Ichigo-chan Headdress from 2002 has this tag though, so I'm not sure until when it was used. I also haven't seen a dress that apparently has this tag. 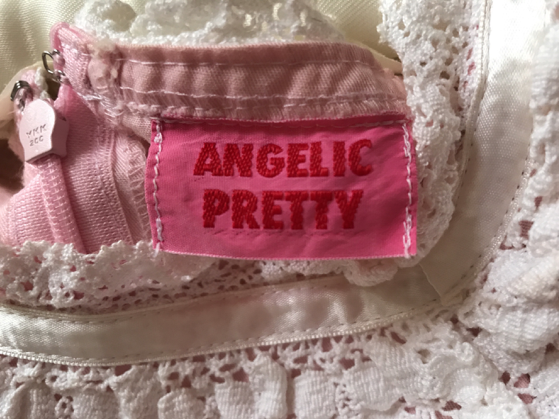 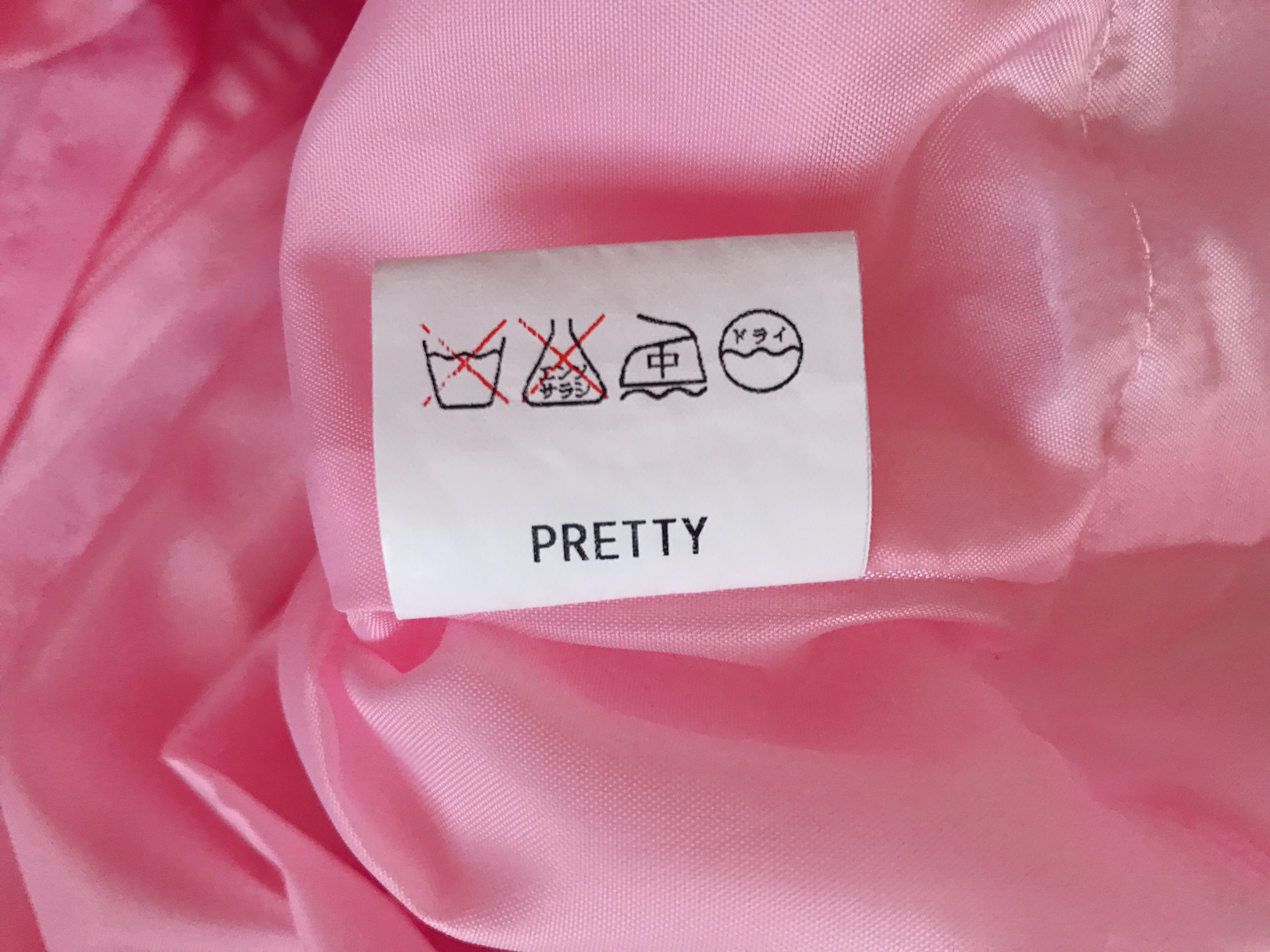 (Tag and Care Label from Side Spindle OP from late 2000s.)

The second Angelic Pretty tag and the first with the new name Angelic Pretty. The care tag still has PRETTY so it must have been released prior to the company name change at the end of 2001. Angelic Pretty was still being referred to as both Angelic Pretty and Pretty in Gothic Lolita Bibles. 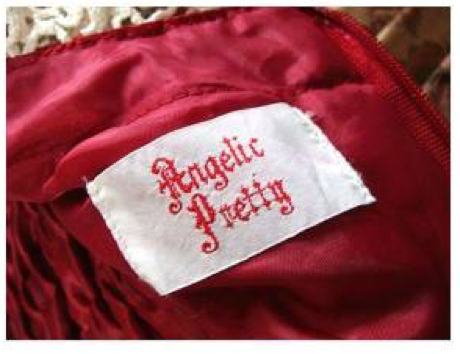 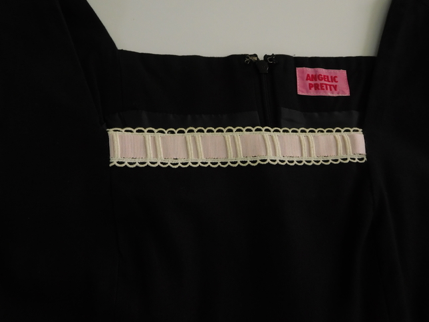 The fourth Angelic Pretty tag. This is where it gets confusing..as you can see it's the same tag as the second from 2000s. I have absolutely no idea why some items from 2003 have this tag but there are also dresses still using the prior gothic tag. To differentiate between 2000 and 2003, you'd have to check the care label, which if from 2003 would be Angelic Pretty rather than PRETTY. 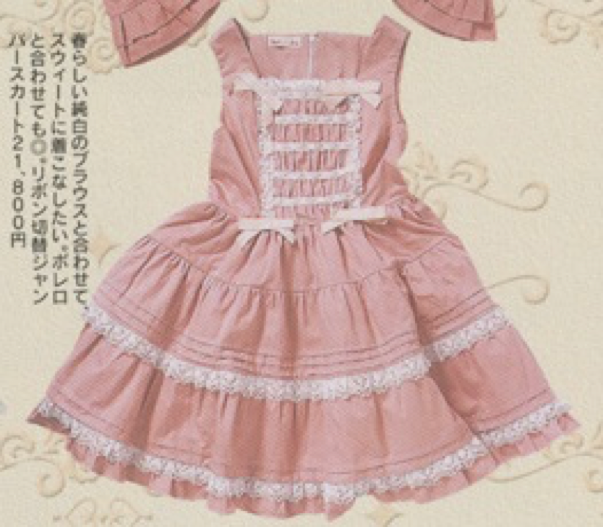 The fifth Angelic Pretty tag. Gothic font in pink with gold crown in between the words 'Angelic' and 'Pretty' on a white background. (Sorry I don't have a close pic of this one, but it's almost the same as the next one.) 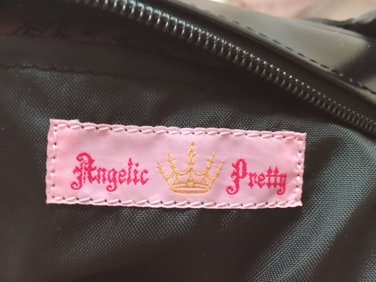 The sixth Angelic Pretty tag. Exactly like the 5th, but on a pink background. 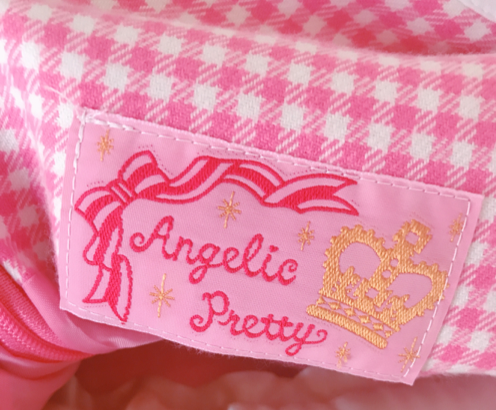 
Angelic Pretty 2010 and beyond

After 2010(?) they then used the tag with a big pink ribbon with polka dots with the Angelic Pretty font used on their current shopper bag. I don't know much about modern items, but as far as I know they are still using that tag. There's also the same in purple for their more mature line. 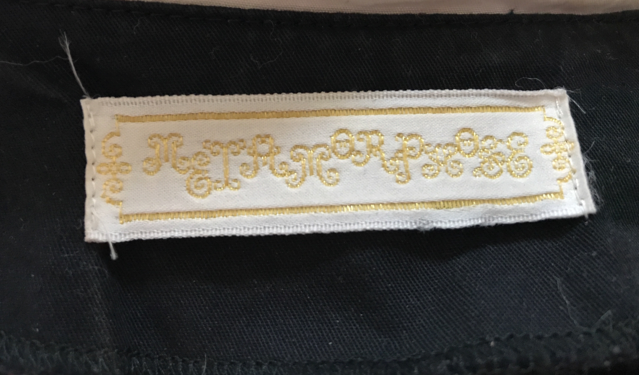 This is probably the first Meta tag documented, or well known as the first. Gold curly font in capital letters. There are some skirts from 2001 and 2002 that still uses this tag, but I believe it stopped being used in dresses at least by 2001. 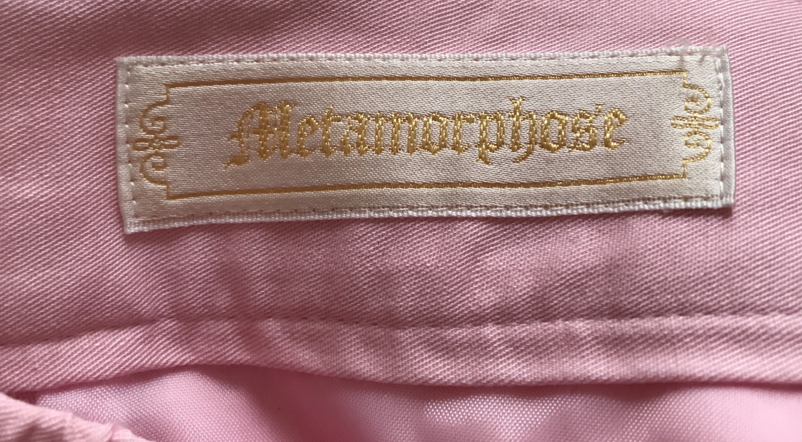 I personally haven't seen this tag used in dresses. 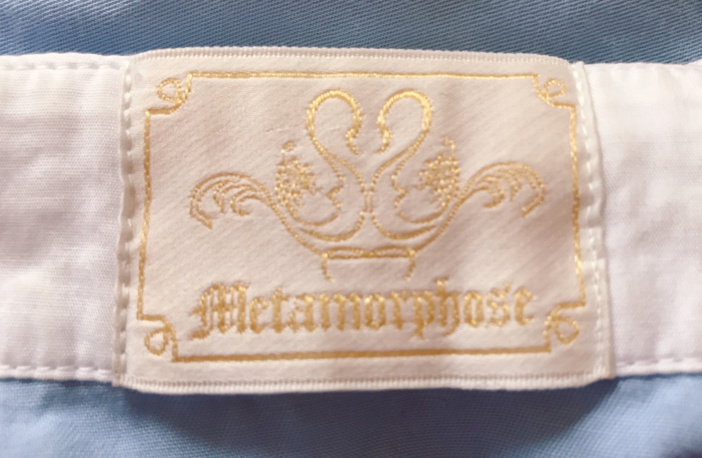 Mostly seen in dresses from what I gather. 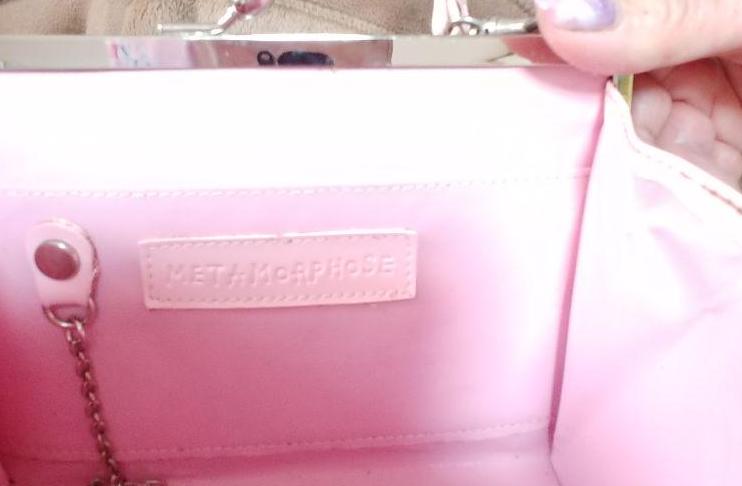 I've recently just come across this extremely unique lovely tag! It's very very different to the normal Meta tags, and I never knew of its existence until now. This bag was feautured as an illustration in the first Gothic Lolita Bible. I believe it was released in 2001 (or maybe 2000). I have no other knowledge of this tag being used. 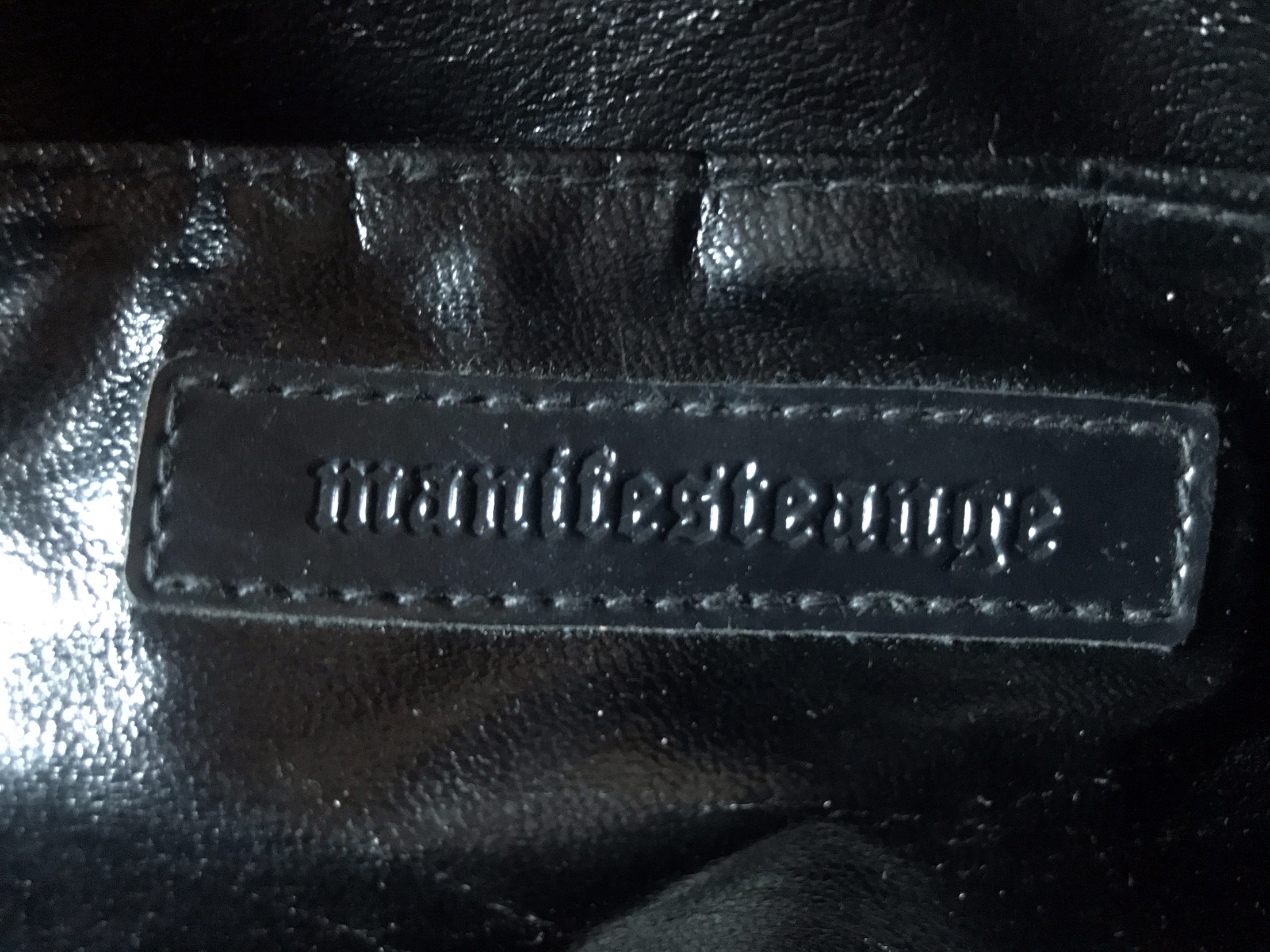 This is a bag from around the same time as the one mentioned before but with a completely different tag that is more aligned font wise with the other Meta tags mentioned. Also note that Metamorphose's full name was Manifesteange Metamorphose Temps de Fille, which is why the tag says Manifesteange. I read on Meta's early website that the 'image' of Manifesteange was of an accessory line, so I was not surprised that a bag might come with a 'Manifesteange' tag. Also, some socks also have 'Manifesteange' written on the backs. 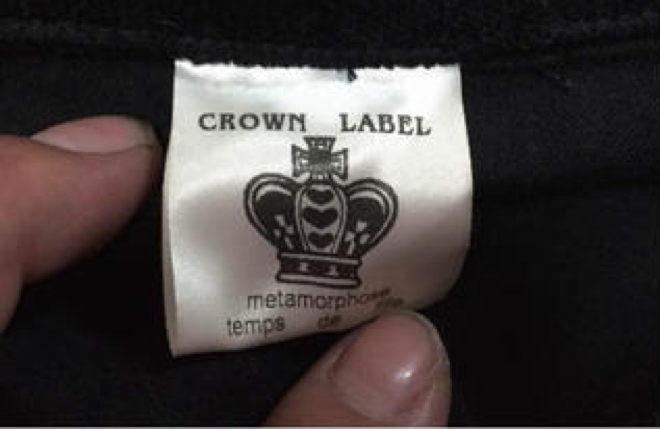 First Crown Label tag. My knowledge of CL is shaky but CL originally, was launched in 2002 according to Meta’s site to release items twice a year at a more affordable price than the main label. The tags may have changed at some point. 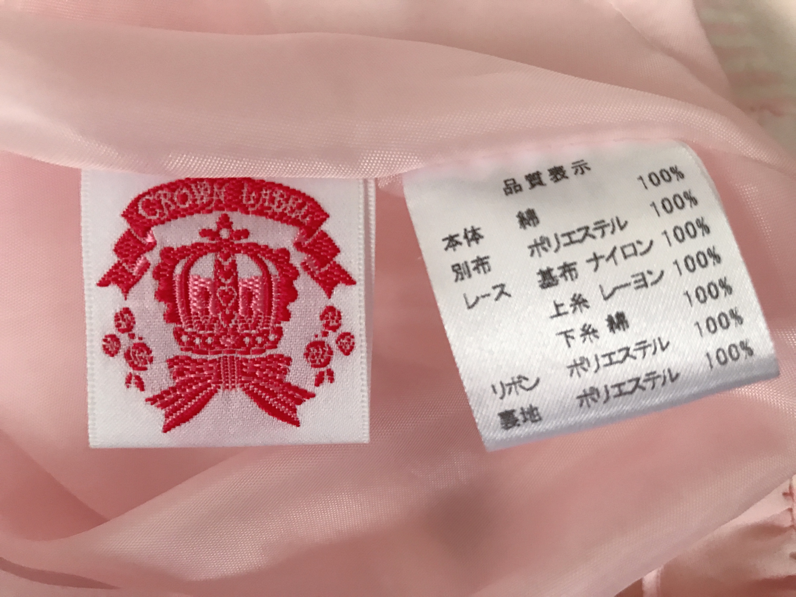 Crown Label releases disappear on Lolibrary between 2007-2008 and come back in 2009. According to Meta's modern website, Crown Label was launched in Spring & Summer 2009 (maybe due to the change in designers the past Crown Label is not mentioned) as a sweet line to Metamorphose. 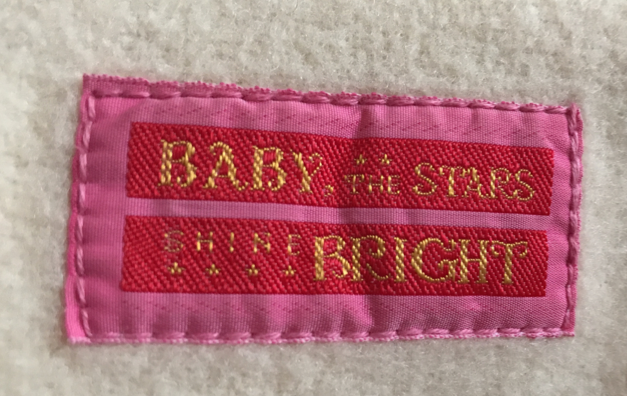 Unlike the indecisive Angelic Pretty, BABY never changed its tag, logo or name, which makes this section easy to write (but makes pieces impossible to ID simply by tag). Sometimes the tag is sewn in as a triangle, so that’s cool. 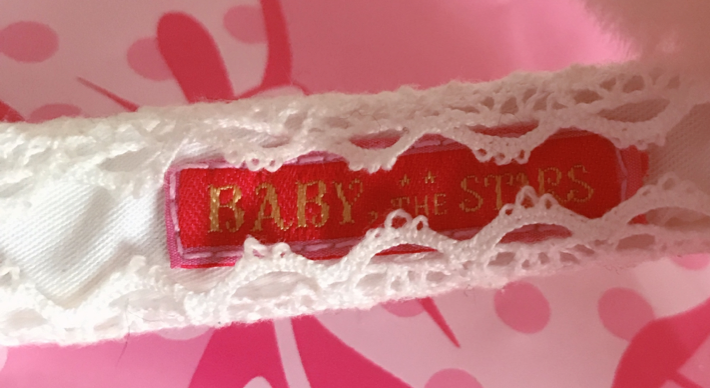 Same tag, just cut off at BABY, THE STARS because it's too long. 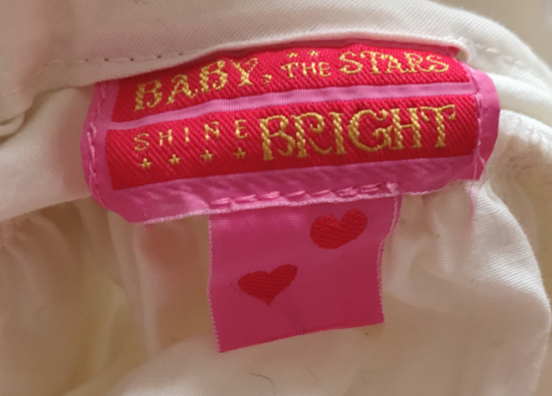 Same tag of course but I do not know what the hearts signify. It may be that the item came in different sizes. I’ve seen a Millefeuille JSK with this tag also, which was also released in different sizes in 2010. 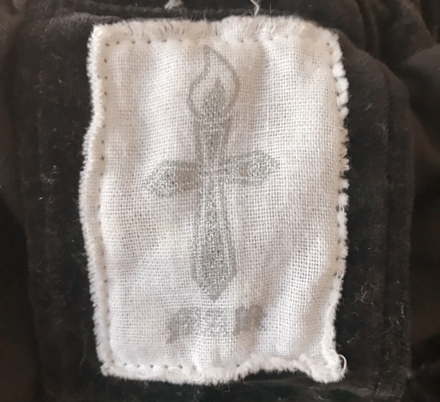 I believe this is the first MAM tag, it is a cross with a flame with MAM written in gothic letters in silver. Either on a white or black background 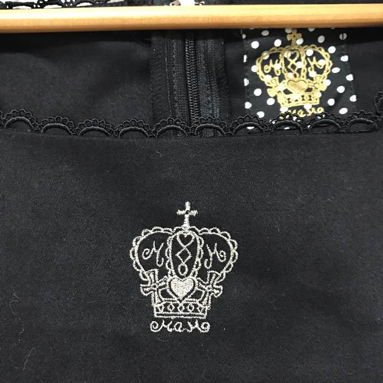 Gold crown possibly with Mam or Mam Maxicimam written below in cursive on a black and white polka dot background. I can't remember what dress this is (it isn't mine) but I'm sure it's earlier than the next tag. I can't see the whole tag so I can't tell if it's just a variant of the next one. 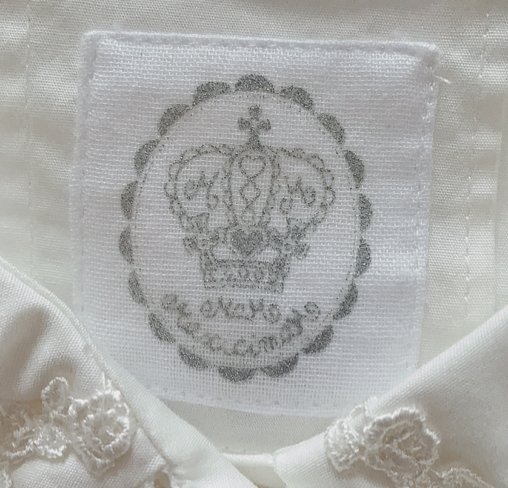 Similar to the one before. Silver crown with Mam Maxicimam written below in cursive on a white background. 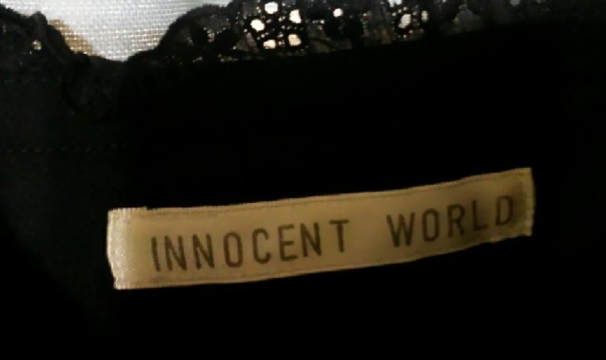 This could be the earliest IW tag but I really don't know. It looks old for sure.

I think this is still the current tag and it seems to have been used since 2001 ish.


I can't say much for brands like Victorian Maiden or Moi-Meme-Moitie etc because I don't own any of them and haven't looked into their tags. Unless I get more information or find new tags this guide is complete.